In our most recent Stop and Search podcast, we tackle a very difficult, troubling and sensitive subject. With our guests, Marie Nougier from the IDPC, and Sanho Tree from the Institute for Policy Studies, we take a look at what’s happening in the Philippines as they wage their literal war on drugs. 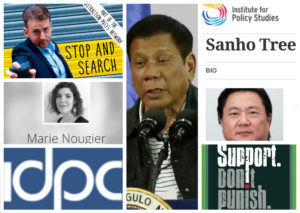 In the past few weeks the newly elected president, Rodrigo Dutertre, has pledged to end crime in his country by extinguishing the threat of drug trafficking and producing. In practice, like many policies of this ilk, the social damage is mounting with over 2000 reported deaths – and counting! It’s clear to see that many innocent people will be caught in this net of communal destruction.

Listen in as we take a look at what’s going on – and there’s ways in which we can get involved, and to ‘Support. Don’t Punish‘!

Stop and Search is part of the Scroobius Pip Distraction Pieces Network, brought to you by Acast – in association with LEAP UK