What happens when you get an actor/comedian, undercover drugs cop, and a writer in a bookshop on a hot summer’s night? This isn’t a joke, although it did prove rather amusing, but this what took place on the latest episode of Stop and Search, our podcast on Scroobius Pip’s Distraction Pieces Network. On this episode, we chat to LEAP UK friend Rufus Hound.

Rufus joined us to talk about drugs, but also drugs in the entertainment field. Our books, television, and films are crammed with drugs. We’re clearly titillated by the subject – society likes to throw a voyeuristic eye at all elements of drug culture. Since starring in the documentary The Culture High, Rufus has kept in touch with LEAP UK’s activities and has an ability to talk about drug policy in a brilliantly funny, stripped back manner.

So, with drugs culturally embedded, why are we still inhibited when it comes to sensible dialogue on drug law reforms? 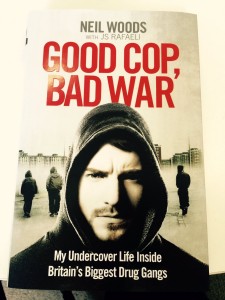 LEAP UK’s Chairman, Neil Woods, a former undercover drugs detective, has led the life that would fit on any television screen. Such is Neil’s fascinating career, his memoir is set for publish on August 18th. Written with journalist and musician, JS Rafaeli, Good Cop, Bad War takes an in-depth look at how policing our drug laws led an undercover detective to re-evaluate their part in the perpetual ‘war on drugs’.

Previous episodes of Stop and Search are available on Acast and iTunes. Please do download, listen, share, and indeed rate and review us on ITunes. We aim to bring you a behind the scenes peek at the conversations that we get to have in drug law reform circles. So, please do get involved!