We were privileged to sit down with Ethan Nadelmann of the Drug Policy Alliance. If you follow drug policy, then you will need no introduction. Ethan has been one of the global leaders in drug policy reform for a few decades. Also joining he discussion is George McBride who is Head of Advocacy at VolteFace.me. Have a listen as we have a chat about a number of things in this U.S election special:

We cover a range of issues in this special podcast – we take a look at Stop and Frisk powers, new ballot initiatives which could see a few more U.S states legalise cannabis, and what we may see in the presidential rac 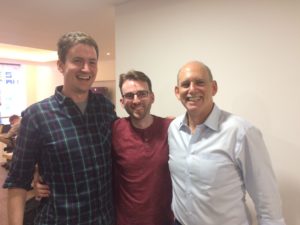 e. We were certainly lucky to make the most of Ethan’s time while he was over on his brief trip to London.

Find Stop and Search on iTunes, or listen via the Acast site which will give you scrolling links and further information. If you’d care to share, then use this link on your social media: https://aca.st/6e6fae

And please do subscribe, share, and give us a nice iTunes rating and review if you get the chance.

Stop and Search is part of Scroobius Pip’s Distraction Pieces Network, brought to you by Acast, in association with LEAP UK