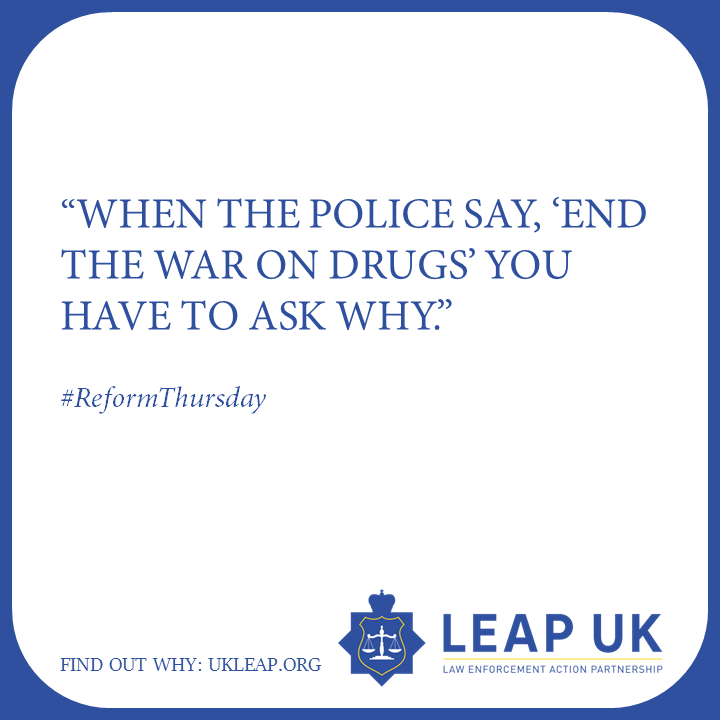 For anyone living in the UK, it is impossible not to have noticed that the terms of the drug policy reform debate have shifted considerably in recent months. After years of reticence from governments of both major parties, the UK home secretary has finally bowed to public pressure and announced that from today, 1st November 2018, medical cannabis will be rescheduled to Schedule 2, making it available on prescription. Medical bodies including the Royal College of Physicians, the Royal College of Nurses and the British Medical Journal (BMJ) have come out in favour of decriminalising or legalising drugs in one form or another. Where once upon a time the very thought of supporting drug law reform would have been a vote killer and a career killer for any politician, many including Jeff Smith MP (Lab.), Crispin Blunt MP (Con.) and Ronnie Cowan MP (SNP) are now openly and very publicly calling for a complete overhaul of our current drug laws, to be replaced with legal regulation for all drugs.

It is in this climate that law enforcement has found it’s voice. Not so long ago it would have been unthinkable for a police officer to suggest there was any possible alternative to the crime and punishment response of arresting anyone remotely connected with using drugs or selling drugs. Now both Durham and Avon & Somerset Police forces operate diversion schemes offering education instead of criminal records. Police and Crime Commissioners Arfon Jones, David Jamieson and Ron Hogg are among those who have been vocal in calling for reform of how the police respond to drugs. The Police Federation at their annual conference in June 2018 noted that 100 years of prohibition had failed to check the proliferation of drugs or drug related violence in the UK and called for “a public debate on the future of drugs legislation“.

Here at LEAP UK, our ranks are swelling fast. We hear from new police, military and criminal justice figures every week who tell us that they feel their own personal fight in the ‘war on drugs’ has been in vain. They have wasted years, often at the expense of physical and mental health, trying to achieve the unachievable. They tell us it is time to try something else. It is time for change. It is time to legalise and regulate.

To celebrate our membership and to put a spotlight on each one of them for their unique, individual brilliance, we are going to post a new quotation from a LEAP UK member across our social media channels every Thursday. You can follow along by searching the hashtag #ReformThursday on Twitter, Instagram and Facebook or checking back when we update this post every week! 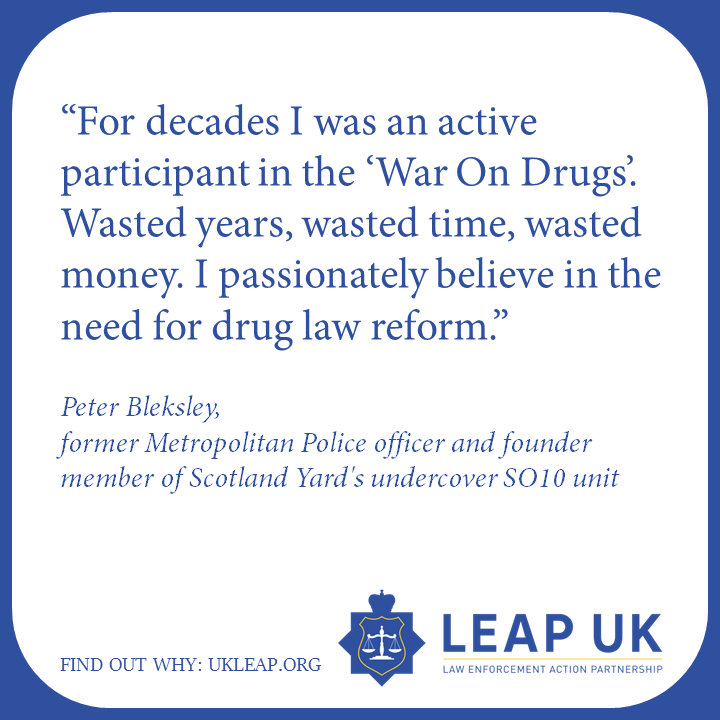 “For decades I was an active participant in the ‘War On Drugs’. Wasted years, wasted time, wasted money. I passionately believe in the need for drug law reform.” 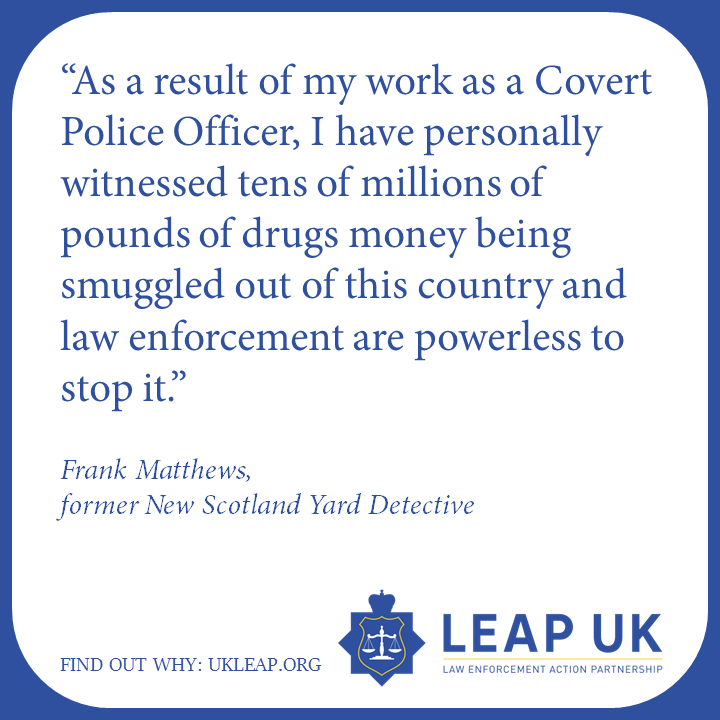 “As a result of my work as a Covert Police Officer, I have personally witnessed tens of millions of pounds of drugs money being smuggled out of this country and law enforcement are powerless to stop it.” 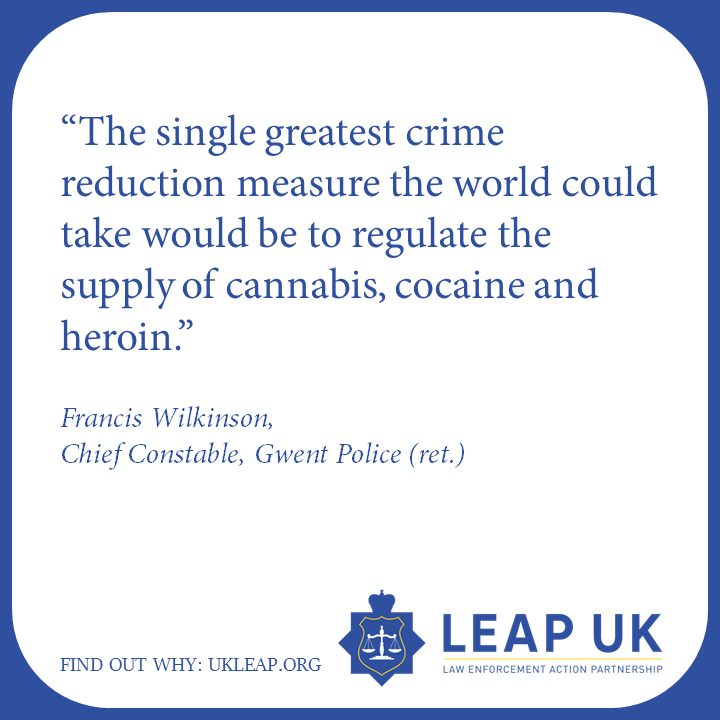 “The single greatest crime reduction measure the world could take would be to regulate the supply of cannabis, cocaine and heroin.” 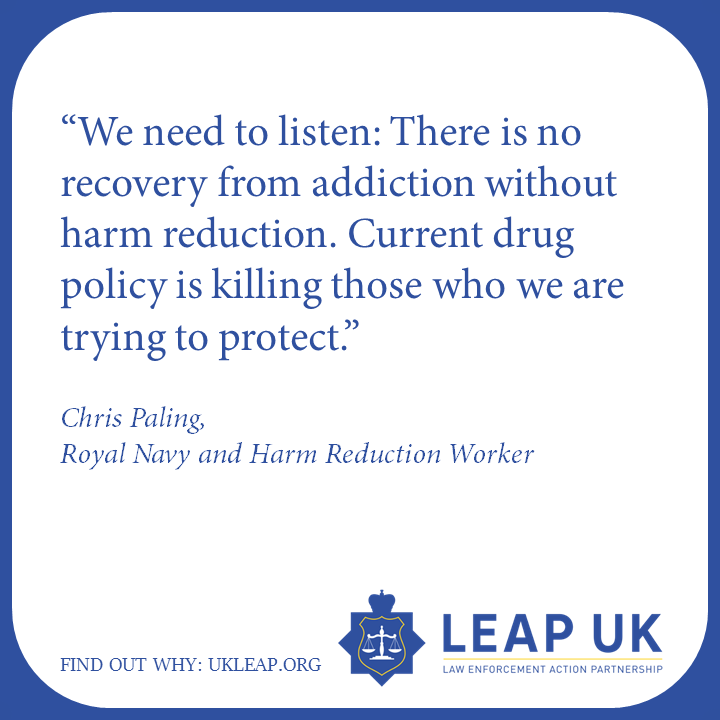 “We need to listen: There is no recovery from addiction without harm reduction. Current drug policy is killing those who we are trying to protect.” 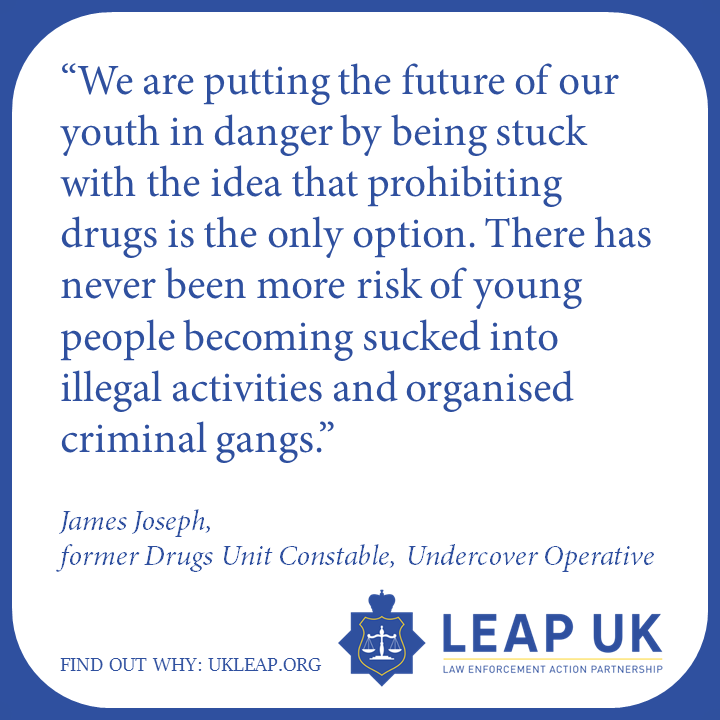 “We are putting the future of our youth in danger by being stuck with the idea that prohibiting drugs is the only option. There has never been more risk of young people becoming sucked into illegal activities and organised criminal gangs.” 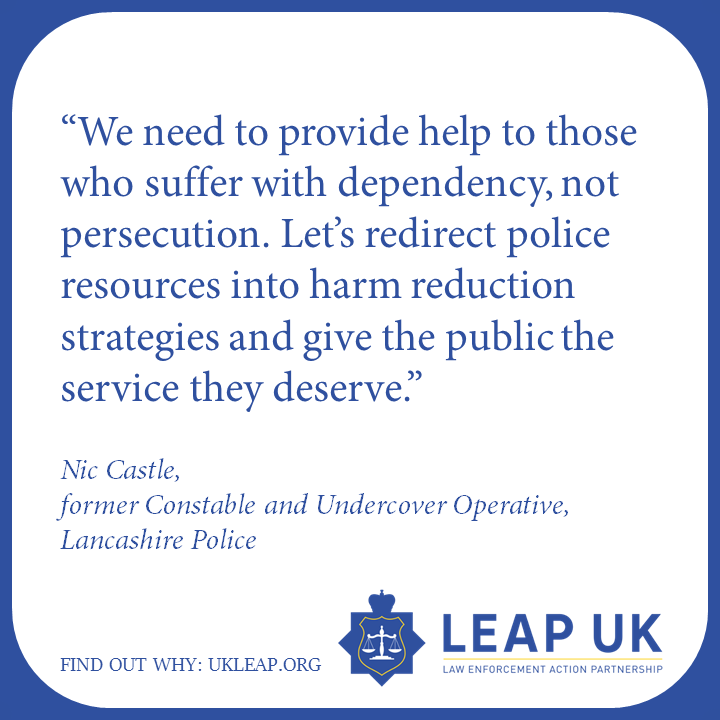 “We need to provide help to those who suffer with dependency, not persecution. Let’s redirect police resources into harm reduction strategies and give the public the service they deserve.” 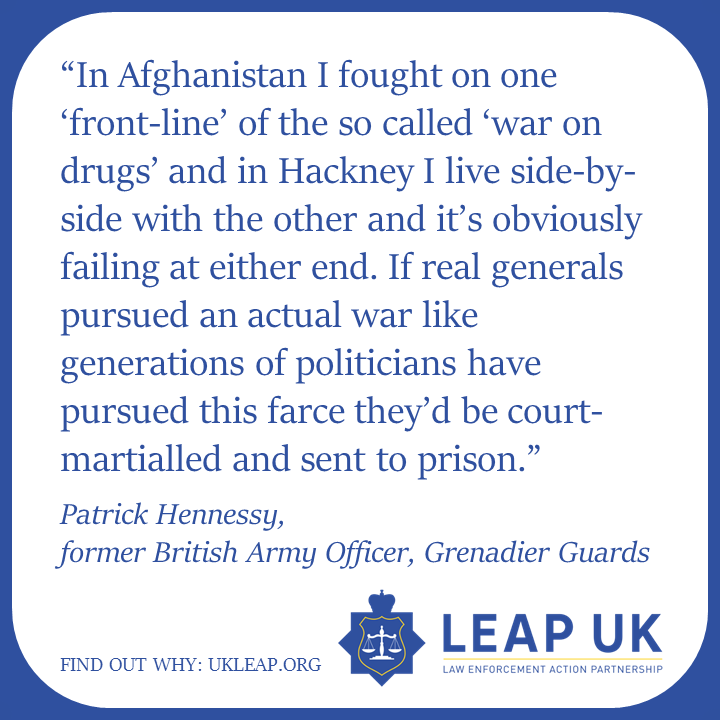 “In Afghanistan I fought on one ‘front-line’ of the so called ‘war on drugs’ and in Hackney I live side-by-side with the other and it’s obviously failing at either end. If real generals pursued an actual war like generations of politicians have pursued this farce they’d be court-martialled and sent to prison.” 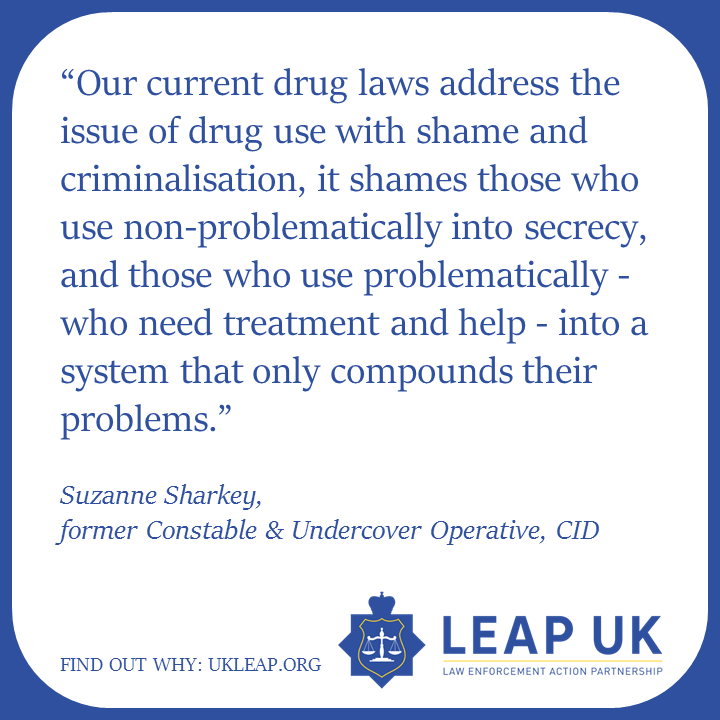 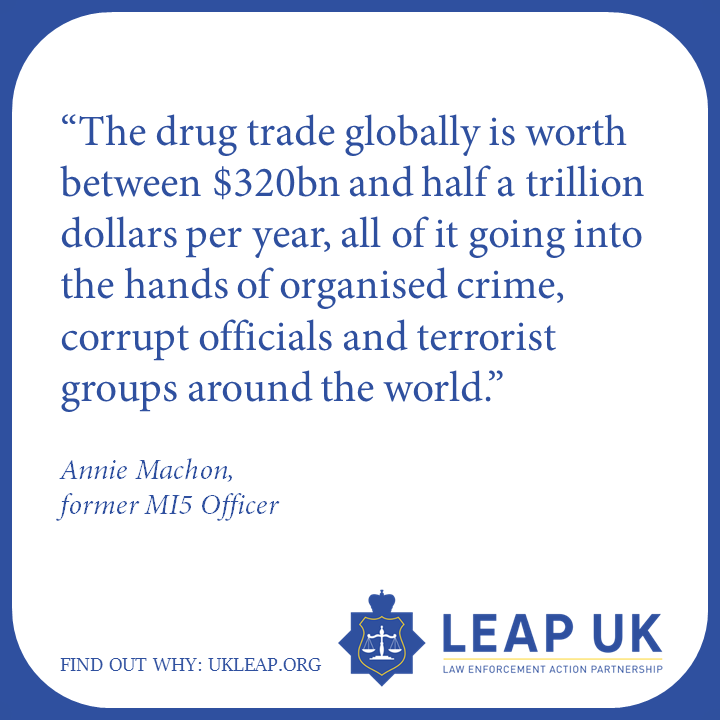 “The drug trade globally is worth between $320bn and half a trillion dollars per year, all of it going into the hands of organised crime, corrupt officials and terrorist groups around the world.” 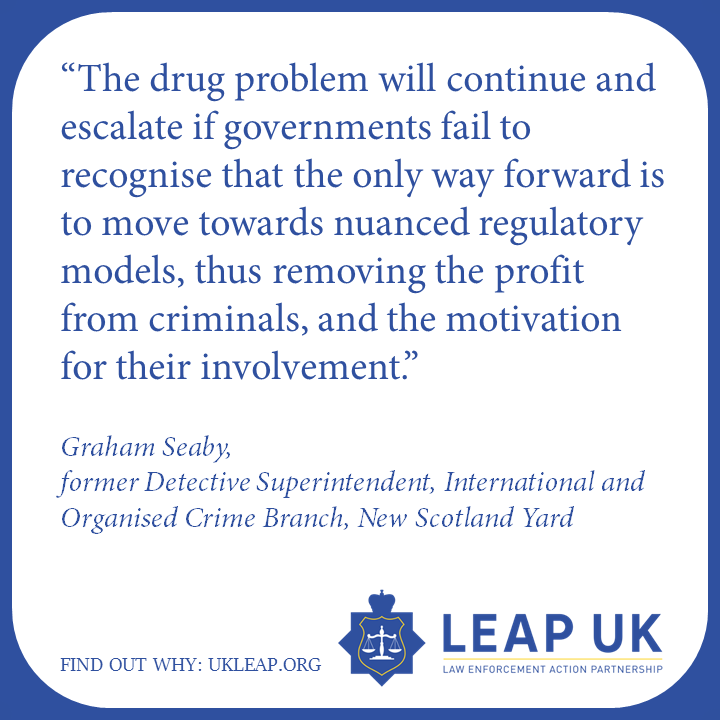 “The drug problem will continue and escalate if governments fail to recognise that the only way forward is to move towards nuanced regulatory models, thus removing the profit from criminals, and the motivation for their involvement.” 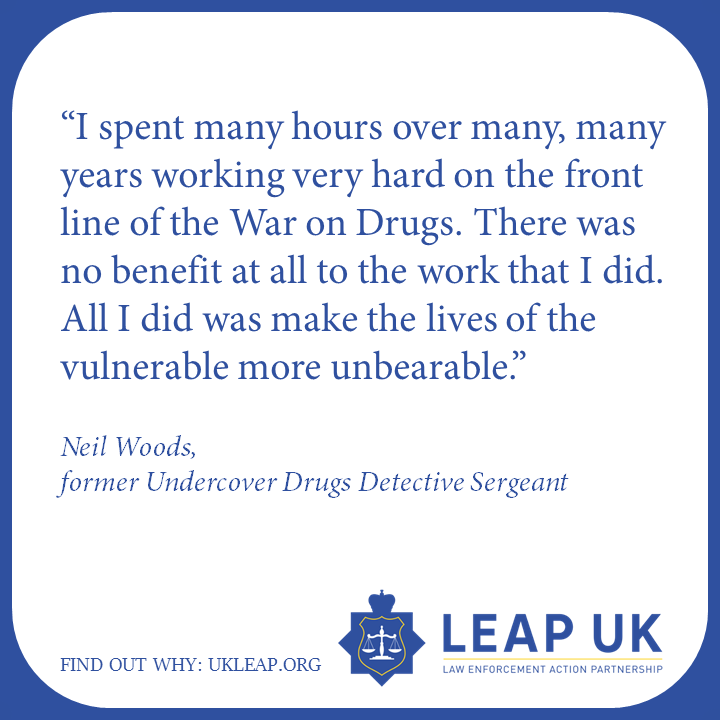 “I spent many hours over many, many years working very hard on the front line of the War on Drugs. There was no benefit at all to the work that I did. All I did was make the lives of the vulnerable more unbearable.” 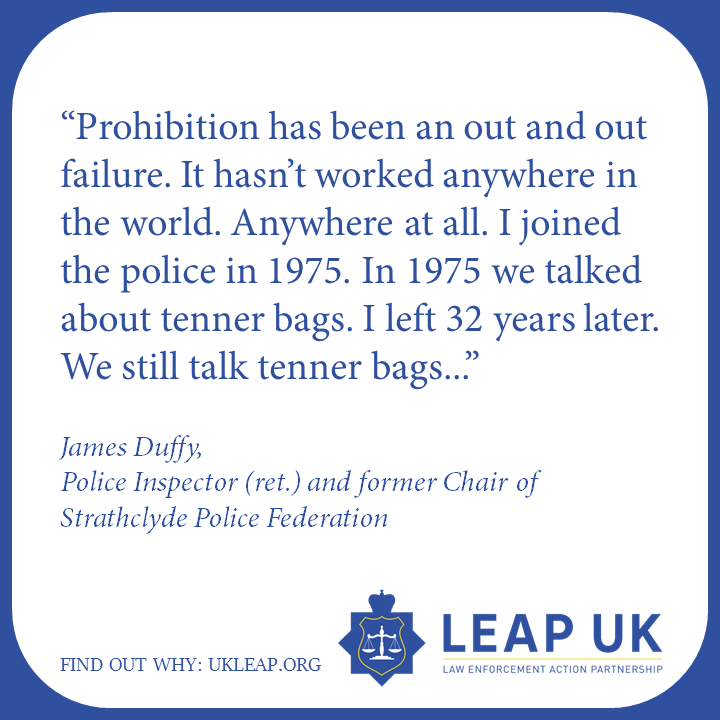 “Prohibition has been an out and out failure. It hasn’t worked anywhere in the world. Anywhere at all. I joined the police in 1975. In 1975 we talked about tenner bags. I left 32 years later. We still talk tenner bags…” 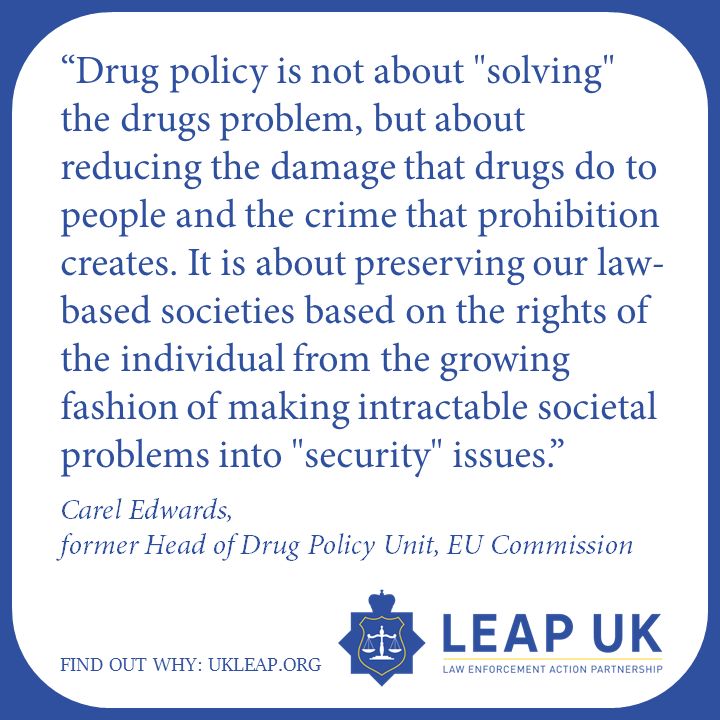 “Drug policy is not about “solving” the drugs problem, but about reducing the damage that drugs do to people and the crime that prohibition creates. It is about preserving our law-based societies based on the rights of the individual from the growing fashion of making intractable societal problems into “security” issues.” 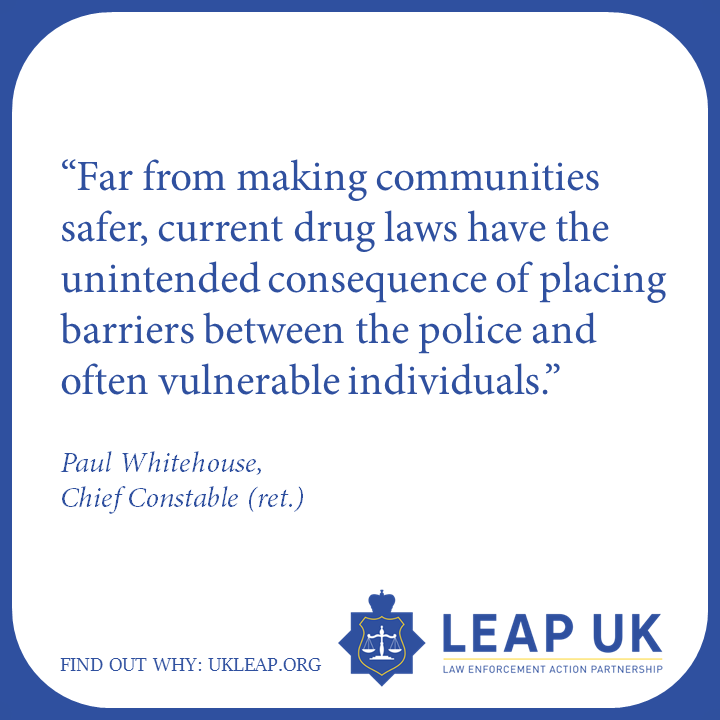 “Far from making communities safer, current drug laws have the unintended consequence of placing barriers between the police and often vulnerable individuals.” 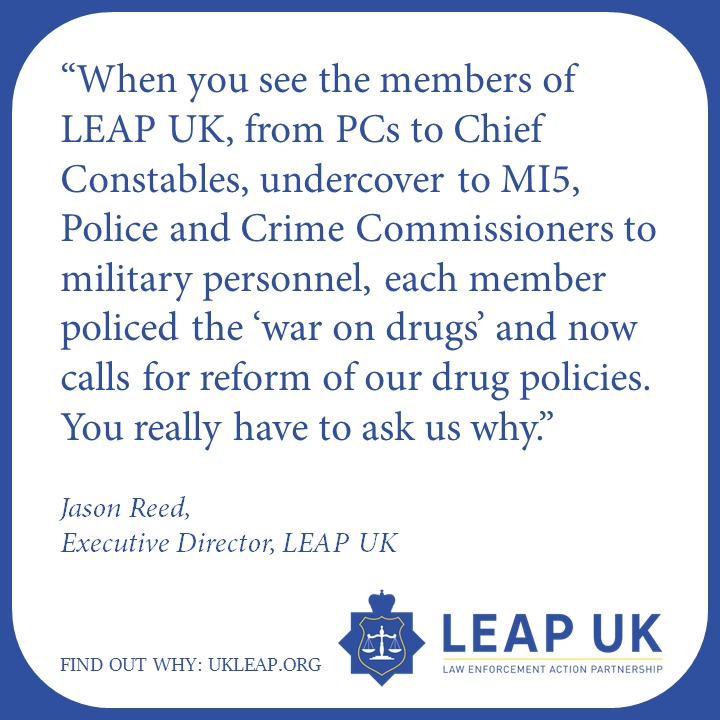 “When you see the members of LEAP UK, from PCs to Chief Constables, undercover to MI5, Police and Crime Commissioners to military personnel, each member policed the ‘war on drugs’ and now calls for reform of our drug policies. You really have to ask us why.”