When I think of restorative justice the first thing that comes to mind are community courts, offering young offenders the chance to pay back to communities they may have slighted by spraying graffiti. It never once occurred to me that this concept may be present in other spheres such as working with ex police officers as somebody who has used drugs in the past. When I first began to interact with LEAP UK, I was asked if I could work with someone who had been an undercover police officer as part of drugs squad. To be honest I was a little confused by this. Surely I should hate this person? After all many of my friends were imprisoned or at the very least given a criminal record by police officers, many of whom used underhanded tactics to gain a collar so to speak. However, I took a deep breath and thought ‘go on at the very least it will be interesting.’

I remember contacting Neil Woods to speak to him about working together. I was very nervous to say the least! I mean at one point he was the enemy. He was somebody who I would have hated and treated with disdain. However, when I spoke with him on the phone something strange happened. I realised that he was just another human being and somebody who was really keen to try to atone. After all, one thing that people forget is that Neil left the sphere of undercover police work because he realised it was wrong and that police undercover tactics were making the lives of drug users much worse. 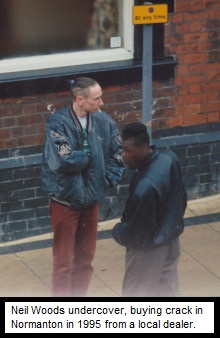 He had the wherewithal and the courage to take a stand and try to make things right. To me this is restorative justice in its finest form. This person was not ordered to try to make amends by a court. He did it off his own bat. Would I have the courage to do this? I’m ashamed to say no I would not. Indeed when I stopped using hard drugs I shied away from trying to make things right, choosing instead to slink off and try to start again.

In many respects working with Neil has helped me immensely. It has helped me to make sense of things that happened when I was a poly drug user. It’s really lovely to have someone to speak to who was ‘on the other side’ so to speak. When I stopped using harder drugs I struggled to make sense of group dynamics. Why were people so violent? Why were they so unafraid of hurting people, including me? I would go so far as to say I had PTSD over some of the things that had happened. One of the core methods of dealing with this is closure. I feel through my conversations with Neil that I have gotten as close to this as I am ever going to. In our telephone calls he has explained the dynamics of gangs, the lack of fear demonstrated by those even at the bottom of the organised criminal groups. He is also incredibly supportive and I feel that I have made a good friend as well.

The thing with restorative justice is that it is not always what it seems. Sometimes we have to let old injustices die. We need to reach out and speak with the police, we need to educate them. People join the police to try to make a difference, they believe in keeping communities safe and free from harm. However in many respects the continuing prohibition of drugs does the exact opposite. Although, it is our duty as people who do not agree with the prohibitive stance of the UK government and institutions, to inform them of this in a polite and constructive manner. LEAP UK is really striving to gain the support of serving and retired officers. The voice of the police is sorely needed in the sphere of reform and all of its associated debates. Through conversations with Neil I have learnt so much. More importantly I have been able to let things go and move on. I am so hopeful that as LEAP UK progresses and continues to perform well that more people will join in the conversation and engage with the police. After all, to put it simply: when cops say legalise you have to ask them why!