The UK government were petitioned by nearly a quarter of a million signatories to debate the legal regulation of cannabis. Despite the initial lackluster response from the government, the debate has just taken place. Lasting around two and a half hours, it’s a shame that only a handful of MPs turned up – as was expected.

On the lead up to the debate, LEAP UK featured on The Guardian, giving comment to the pending debate and societal harms of current drug laws.

Below is a small briefing on the debate. Overlooking the lack of attendance from MPs, the proceedings were quite positive, but needless to say, reform efforts have to continue. 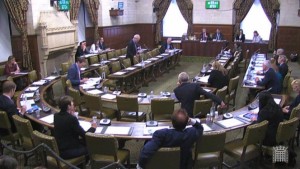 Attendees of the debate

Paul Flynn MP opens. Details futility of drug laws and conveys harms of prohibition. Medical uses crops up early: “I’ve looked in the eyes of many that have asked why can’t I take it [cannabis]?” Flynn continues with his speech, citing Holland: cultural normalisation takes away the lure of forbidden fruit. Mentions how grandmothers take medicated cakes, thus rendering the use of cannabis dull and less attractive to rebellious teenagers.

Peter Lilley MP doesn’t advocate cannabis use, but urges with some vigour the need for medical permission, “We can all agree that it should be made available”. Lilley wrote the ‘Common Sense on Cannabis: The Conservative Case for Change’ report and cites this as an early example of calling for full reform. Attempts to prohibit have failed; usage is higher here in the UK under prohibition than in countries where it’s freely [legally] available. Finishes with how decriminalisation isn’t enough; we need legal cannabis outlets to cut the potential for drug dealer ‘gateway’.

Dr Paul Monaghan MP can see merits of full reform, but focuses primarily on medical use. Looks at rescheduling cannabis and urges to move to Schedule 2 to open up therapeutic routes. The ‘International Comparators‘ report shows that the harshness of drug laws do not impact on the levels of substance use.

Dr Dan Poulter MP doesn’t accept that ‘skunk’ is a product of prohibition, gives the example of Holland’s coffee shops and how sale of high potency is on sale. Goes into cannabinoids and how they interact with brain when smoked. Mentions mental health. Ostensibly doesn’t support reform based on possible harms. Gives merit to the rescheduling for prescription use. Stresses the need to look at the Criminal Justice System (CJS) and better support instead of criminalisation.

Norman Lamb MP focuses on criminalisation, and how a ‘civilised society’ should act in drug policy. Highlights the cash-stream that funds international crime syndicates and terrorism. Makes the point of hypocrisy of politicians that have used drugs. Looks towards U.S states and their political positions on regulated cannabis markets, giving an example of Alaska and how this is a Republican state (highlighting that this issue extends beyond presumed party lines). Lamb says that we could overnight change laws on medicinal use – and who would argue?

Caroline Lucas MP says we should be guided by evidence and review Misuse of Drugs Act 1971. Highlights the United States and decriminalisation and legalisation initiatives. Believes there’s compelling ground to instantly legalise medical cannabis. Uses constituents’ testimony to show how harmful drug laws are to individuals. Reiterates how cannabis is not gateway drug, but the link to criminal market is. No link to illegality and usage. Powerful evidence that current laws compound our problems. Prohibition doesn’t allow for informed opinion and education.

Lisa Cameron MP looks at both sides of the debate, highlighting medical benefits, then goes into reported harms to mental health. Mentions ‘skunk’ and high levels of THC. After an intervention from Peter Lilley, Lisa Cameron concedes that vulnerability and susceptibility towards harms plays a part in potential mental health problems associated with cannabis.

Anne McLaughlin MP uses her constituents’ comments to cover both sides of debate, but promotes the commitment of research to study drug policy as a whole. Brings up the divide in a CJS approach and the disparity in socio-economic groups; middle and upper classes don’t tend to get prosecuted or hindered, whereas ethnic minorities and lower socio-economic groups face CJS reprisal.

Lyn Brown MP speaks of postcode lottery in policing and convictions, and racial and socio disparity. Criminalisation hinders job prospects. Doesn’t want to see cannabis legalised for medical use as we have Sativex, and then urges change on this aspect to free up access to this prescription medicine. Goes into mental health once more.

Paul Flynn urges the government to rescue sufferers from their “bed of thistles” – referring to medical use.

Peter Lilley enforces the point that prohibition isn’t helping harms and could be ameliorated by reform.

The debate ends with the ayes have it.

And there you have it, our work continues.