As Chairperson of LEAP UK, Neil Woods is often asked to speak at conferences and debates where he conveys just what it is like to work as an undercover drug detective, how this impacts on both society and individuals, as well speaking about the mental health of those serving undercover. Recent events have included speaking at South Africa Drug Policy Week in Cape Town and talks in Oslo and Bergen hosted by Foreningen Tryggere Ruspolitikk (Norwegian Association For Safer Drug Policies) and Normal Norge (NORML Norway). The Norway events attracted a great deal of local interest and the talk at Bergen was live streamed for anyone who couldn’t make it in person. The Norweigian translation of the profile piece below appeared in the regional newspaper, Bergens Tidende, as part of the debate surrounding Neil’s talk. 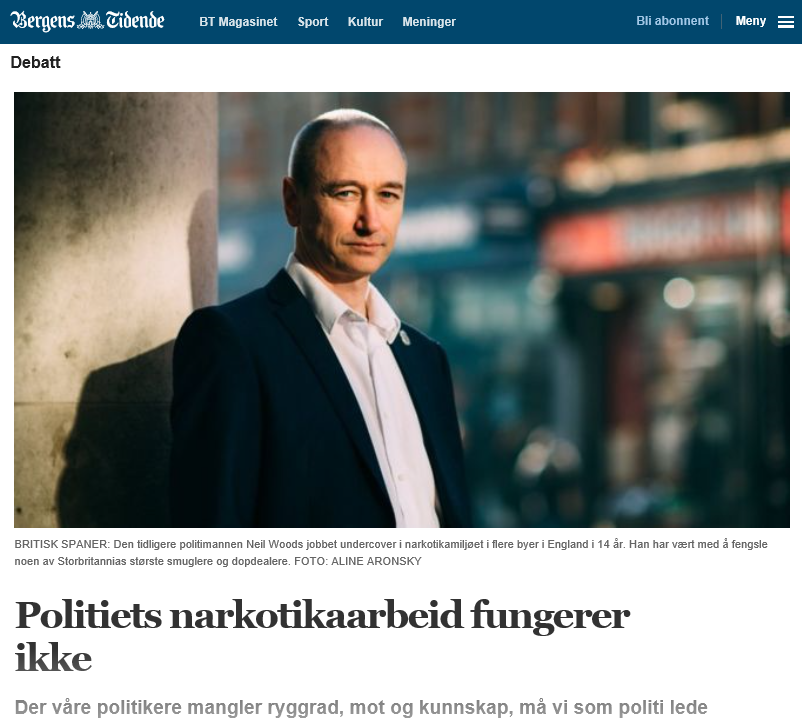 “UK Police say: the War On Drugs Must End

The Northern English city of Durham was originally founded by Viking invaders and was one of the centers of Norse civilization in Britain. Many there are still fiercely proud of their Scandinavian ancestry.

But, today Durham strikes fear into the hearts of Britain’s rulers for a different, very modern, reason. On Friday 14th July I spoke at a symposium entitled UK Drug Policy: More Harm Than Good about my 14-years of experience as an undercover cop putting some of the U.K’s biggest drug-dealing gangsters in prison. Other speakers included Madame Ruth Dreifuss, the former president of Switzerland who brought sweeping drug law reforms to her country, and Rose Humphries of Anyone’s Child, a campaign group of parents and family members who have lost loved ones to drugs. We called for the legal regulation of all drugs.

However, the remarkable thing about this particular symposium is that it was not hosted by a reform charity or NGO, but by the Police and Crime Commissioner for County Durham, Ron Hogg.

In 2015 PCC Ron Hogg made waves by announcing that police resources would no longer be channeled towards cannabis offences. This de facto decriminalization caused uproar in some elements of the national press, but since then County Durham is the only police force in the UK to have been judged ‘outstanding in all aspects’ by Her Majesty’s Inspectorate. Instead of wasting resources on cannabis, Durham Police were able to direct them towards true social harms, vastly improving the lives of the people they are meant to be protecting.

Durham is now building on this success and taking things a step further. Ron Hogg will be using part of his policing budget to provide Heroin Assisted Treatment for the most problematic of heroin users. Once again, we expect some howls of outrage in the tabloid press, but Ragnarök didn’t begin when cannabis was no longer targeted, and we will likely soon have fresh evidence that prescribing heroin can save lives and make communities safer.

In British politics, we see the traditional stalemate of Western drug policy. Two dominant political parties ignore evidence for fear of being labeled “weak on drugs” by a media that love nothing more than a good moral outrage story. So, politics and media loosely conspire to create a narrative whereby the only way to win the War on Drugs is to keep fighting harder. Those of us who have actually fought on the frontline can see through this illusion.

I spent years infiltrating gangs to catch some of the worst drug-dealing gangsters in Britain. I’ve been strip-searched at gunpoint, and had knives held to my genitals. In total, I put people in prison for over a thousand years. Yet, police intelligence suggests the heroin and cocaine supplies in any city where I worked were only interrupted for around two hours.

In fact, though I took some very nasty criminals off the streets, the end result of my efforts was to make the situation worse. Each generation of gangsters is more aggressive, powerful and violent than the last. Since policing can never truly impact on the demand for drugs, we are locked in an endless arms race: the police develop new tactics, and the criminals become more violent in response. The Drug War offers no possibility for de-escalation, and the people who suffer most are the civilians caught in the middle. I describe how I saw this process playing out again and again in detail in my book, Good Cop, Bad War. 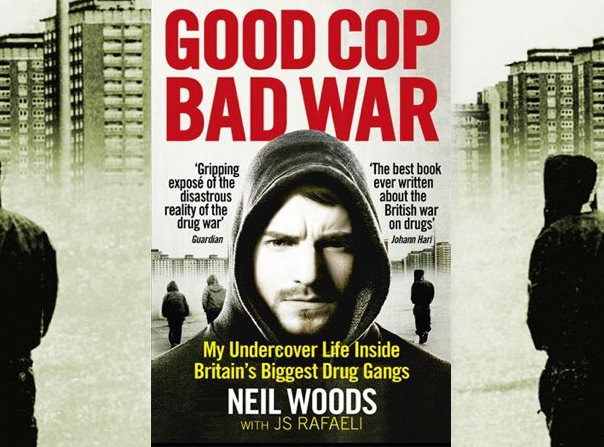 The other deeply disturbing dynamic I describe in the book is how I saw the War on Drugs corrupt the police itself. During an operation in Nottingham in which I was investigating the Bestwood Cartel, headed by the brutal, sociopathic gangster, Colin Gunn, a new officer was brought onto my team. I instinctively didn’t feel right about this guy, and demanded he be taken off my operation.

A year later when the cartel was brought down, it turned out that this cop, DC Charlie Fletcher, was an employee of the gangsters. He had been paid by Colin Gunn to join the police, had done his training and been accepted onto the force. The cartel paid £2000 a month on top of his police wages, plus bonuses for useful information. My instinct about him probably kept me alive. Had he been able to learn my identity I almost certainly would have been killed. But when I went to my superiors in shock, no one acted in the least bit surprised. Their response was, “Of course corruption is happening. With this much money in the drugs trade, how can it not happen?”

The truth is that this kind of corruption is only possible because of the vast amounts of money involved in the illicit drugs market, estimated at $400 billion annually. No other branch of criminality produces anywhere near this amount of money. It is the War on Drugs that makes this illicit trade possible. Drug policy is serving to increase power and monopolization of organized crime. In the UK we have had record drug death rises for three years running, overtaking road deaths for the first time. We have record numbers of people in prison, over 50% of them for drug-related offences. More and more young people are getting involved in the supply of cannabis.

But, the seeds of change are beginning to bloom in the UK. And, in fact, it is the police themselves who are leading the way.

Many Police and Crime Commissioners are looking to Ron Hogg’s leadership in Durham, with North Wales PCC Arfon Jones already declaring he intends to follow suit. Last year two constabularies, Cambridgeshire and Cumbria, allowed drug testing at music festivals in their area. This was so successful in harm reduction that this year it will expand to eight festivals. Let me make this clear, though it is contrary to government policy, police will turn a blind eye to the possession of drugs in order to save lives

To me, it is no surprise that police are leading the way. Police attend the drug deaths. We inform the grieving parents. We see the corruption of our young that the black market causes. We see that our children need to be protected, and a system of regulation will do that far better than prohibition. A drug dealer doesn’t ask for proof of age.

I am on the board of LEAP, Law Enforcement Action Partnership, an international group of serving and former law enforcement officials who are campaigning to legally regulate all drugs. Founded in the USA, birthplace of the War on Drugs, the movement is spreading across the world. I’m chair of LEAP UK, and LEAP Europe is taking shape, with involvement from Germany, France, Belgium, Poland and more.

My good friend Peter Muyshondt is a deputy chief of police in Belgium, and one of the leading LEAP speakers for Europe. As Peter says, “LEAP is free to address the real issues that matter and not be influenced by political motivations. That freedom is a responsibility that sits alongside our sense of duty as police officers.”

The problem is urgent. In the UK we have 48 drug deaths per-million population. In Portugal, where they have moved drugs away from policing and into health, they have three deaths per million. They have achieved this low number since they decriminalised drugs seventeen years ago. One of the few countries in Europe that has a worse problem than the UK is Norway, at 76 deaths per-million.

Peter and I implore any Norwegian Law Enforcement professionals who have seen the harm of a punitive drug policy; speak out where you can, or at least support reforms in principle. Where police advocate drug law reform, communities can become safer and lives can be saved. For the sake of our children, our communities and the integrity of law enforcement itself, the War on Drugs must end. If the politicians don’t have the courage, we as police officers will have to lead the way!