February 29th was LEAP Day – this rare occurrence provided us with the opportunity to do something different. What could be more different than a collection of police, military, magistrates, MPs, public figures and supporters joining together and taking a stand for drug law reform?

LEAP UK officially launched in the House of Commons. We were privileged to have a room full of engaged participants. We’ve gathered together a collection of media from the day. Here’s what people had to say about us and the subject of drug policy reform:

Launching LEAP UK in the Houses of Parliament on Leap Day

Soldiers, Spies, and Police Officers Launch Campaign to Legalize Drugs in the UK

“The statements come like the phrases in a Bach fugue: They are based around a theme, they pick up on each other’s line and modulate it, give it a new nuance, allow for another iteration to create another resonance that counterpoints in harmony what has been expressed before. Together, when it’s the instruments in Bach, the sound they produce is heavenly music; when it’s the speakers at the launch of LEAP UK, it is perfect, even common, sense.”

A Giant LEAP Forward in Westminster

Simple changes in drugs policy could save thousands of lives

With more followed-up in the Greenock Telegraph and CommonSpace

And we were pleased to have most of the morning on LBC Radio dedicated to us with James O’Brien (on paywall subscription) which included a phone in with LEAP UK Chairman, Neil Woods and friend of LEAP, Tom Lloyd.

We were also lucky to have support from eminent figures of medicine with Doctor Christian Jessen in attendance and tweeting throughout our launch. Sam Branson also tweeted with enthusiasm, and author of Chasing the Scream, Johann Hari spoke with a great deal of eloquence and emotive energy in the House of Commons. We thank everyone sincerely, and this is just the start! 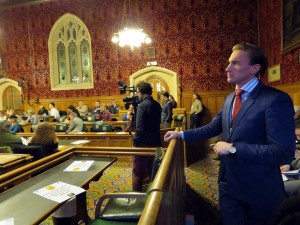 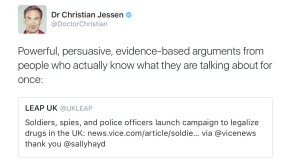 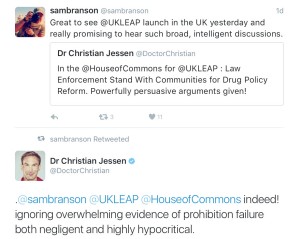