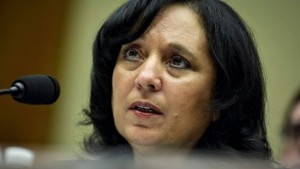 Her retirement was announced by Attorney General Eric Holder.

The DEA said the incidents had happened in Colombia.

Correspondents say Ms Leonhart, who has run the agency since 2007, had been under pressure to resign since testifying to a congressional committee last week.

Following her appearance, a majority of the committee said they had lost confidence in her.

“Michele has led this distinguished agency with honour, and I have been proud to call her my partner in the work of safeguarding our national security and protecting our citizens from crime, exploitation and abuse,” Mr Holder said.

He added that Ms Leonhart would leave the agency in mid-May.

According to the justice department report, the sex parties were held at government-leased quarters where the phones and laptops of agents were present.

It said that DEA investigators at the time had not reported the allegations because they “did not believe that the special agents’ conduct rose to the level of a security risk requiring a referral”.

The report said that several agents were also provided with money, expensive gifts and weapons.

One DEA official told investigators: “Prostitution is considered part of the local culture and is tolerated in certain areas called ‘tolerance zones’.”

Seven agents who admitted attending sex parties were given suspensions ranging from two to 10 days. One was cleared of wrongdoing.

The investigation had been instigated by Congress following reports from 2012 that Secret Service agents had hired prostitutes while protecting the president during a summit in Colombia.