There’s a commonality that I’ve come to hear working with LEAP – it takes the form of the most basic concepts in humanity. When police officers witness an overdose, the all encompassing instinct and emotive reflex is to save that life. Paradoxically, the thought of criminalising the patient isn’t exactly at the forefront of the situation.

Jamie Bridge is Senior Policy Manager at the International Drug Policy Consortium (IDPC) and current Chair of the National Needle Exchange Forum (NNEF). In his TEDx Talk, Jamie beautifully outlines the literal life or death need for wider distribution of Naloxone and how we need more education on overdose prevention.

Members of the police are invariably one of the first on the scene… that is, of course, if the fear of criminal reprisal doesn’t prevent a call for help. The U.S has been increasing its Good Samaritan Laws, meaning that the drug consumer and their circle of friends will not be prosecuted if an overdose occurs. This is pure common sense. Sweeping away the culture of fear can only help save lives – there are very real examples of how this eminently sensible provision is making sure that a family gets to see their loved one again as opposed to receiving that call of “are you next of kin?” 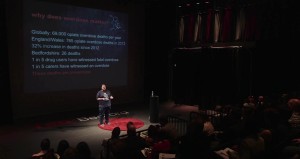 Drug laws, in so many ways, destroy lives. In 2011, fatal overdoses in the UK were around 3,338 – this figure is not just a statistic – that’s nearly three and a half thousand funerals that didn’t have to take place. In context, the number of overdoses of 3,338 exceeded the number of road accident deaths of 1,960. So why do we not do more? In a word: Stigma.

Ending criminalisation rewards us with a culture of openness. This is why we only need common sense, Naloxone and a few changes in the law to save a life. It’s a very simple formula, isn’t it?