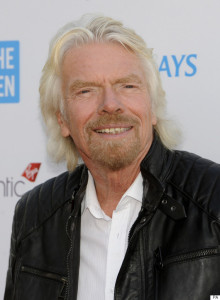 Richard Branson believes the reason more MPs don’t get behind his campaign for the decriminalisation of drugs is that “politicians are terrified of taking any risks, and they’re terrified of the Daily Mail”.

Speaking at the WE Day celebration in London, Sir Richard told HuffPostUK:

“If the Mail takes one stance, then by and large, they’re not willing to take a risk.”

Sir Richard Branson and Nick Clegg are calling for a major overhaul in the way government classifies and criminalises drug users.

The Virgin owner and deputy prime minister have criticised the UK’s so-called ‘war on drugs’ as a “colossal con” and today laid out their case for decriminalising the use and possession of almost all drugs.

Both men accused current policy of being an “abject failure” and said that a new approach to narcotics was desperately needed.

Reminded that the Daily Mail had tagged him a “hippy poseur” following yesterday’s announcement, Sir Richard grinned and decided, “I’m flattered by anything the Daily Mail says.”

He also acknowledged that this could be a beneficial move for the Liberal Party ahead of May’s General Election.

“What’s great, and I don’t get involved in party politics, is that the Liberal party is liberal, and is going back to its liberal roots and taking a stand here,” he said.

“I think it will do it… they’re at rock bottom, and I think a move like this could do them a lot of good.”

Richard also laughed off what he called “emotive headlines”, like those in today’s Telegraph, describing him as someone who is “pro-skunk”.

“I’m not pro-skunk, I think skunk has got some big side-effects, what I am is somebody who believes that the way to deal with drugs is to help people, not criminalise people.

“All the research we’ve done indicates that something like 85/90% of the population believe that the best way of dealing with a drug problem is not locking up our brothers and sisters or our children, but helping them, and if they have a problem, it should be treated as a health problem, not a criminal problem.”

Sir Richard’s daughter Holly is the patron of WE Day in the UK, now in its second year, and she told HuffPostUK how becoming a mother had changed her perspective…

“It reinforces the fact you want the world to be a great place for your children and grandchildren. You definitely think more about the future,” she said.

“Here, we are educating young people, and reminding them they can change the world. It’s great there are programmes out there, and I feel positive about the future. The children here haven’t bought a ticket, they’ve earned their way here, and they’re a great bunch of kids, really passionate.”