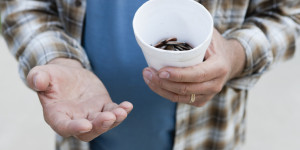 According to the government estimates, heroin and crack cocaine users commit one-third to one-half of all acquisitive crime 1. I saw a study in the late nineties by Greater Manchester Police which estimated that 80% of house burglaries at that time were committed by problematic heroin users. For such a small group of the population (around 300,000) this amount of crime is quite a feat. The reason is fairly straightforward. It’s all in the numbers.

Prohibition has created an underground trade run by Organised Crime Groups. The illicit nature of the trade makes heroin an expensive commodity. In addition to this, for those that have a problematic relationship with the drug, tolerance can develop with a seemingly limitless ceiling. Daily use can require an increased dose daily of around 5%, so a £10 bag a day habit can quite easily turn into a vast amount if the cash keeps flowing. In my days as a Detective I have on numerous occasions arrested and interviewed burglars who have admitted in excess of £100 a day usage.

Whilst it is true that there are heroin users who commit burglaries and robberies, they are a minority. Many others are sexually exploited, or add to the pyramid selling scheme that is the heroin market, by selling the drug to pay for their own habit. For most that do steal, shoplifting is the extent of their exploits. It is, after all, a very mixed bunch of people who find themselves in such dire circumstances. But this minority can commit vast amounts of crime. I used to be quite a persuasive cop, and sometimes I would take a burglar for a tour, where he pointed out, and admitted past crimes. I toured with two brothers, who travelled from Sheffield into surrounding counties. I do not exaggerate when I say that they had committed around a third of the house burglaries for the areas I interviewed them in during the time that they were active.

One of these notorious brothers, I’ll call him Rob, was caught committing night-time dwelling burglaries eight days after being released on licence from prison for similar offences. While he was on remand I took him out of prison to interview him. I had previously done the same three years earlier at the beginning of his last sentence. I asked him, why on earth did he start burgling so soon after being released? He explained that in prison, heroin can cost as much as five times the price outside. If you have a reputation for being able to pay up, like Rob has, then credit can be extended a long way, leading to a hefty debt on release. So the pressure to start paying the money back starts immediately, especially as it will be his family or friends that will be exploited by the gangsters if Rob doesn’t pay up.

When I commenced my career as an undercover police officer, it was a long time before I was to meet Rob, and the dozens of other offenders that had heroin problems, but I I had it in mind that heroin users were thieves. I decided to watch my back, believing that everyone stupid enough to have got themselves hooked on the brown sugar would rip me off as soon as look at me. In my position as spy in their lowly ranks I had the chance to learn what it was to be like them, and to be treated as an equal. From that situation I was able to learn a great deal about human nature, and I was to discover my preconceived ideas were very far from the mark.

It is estimated by drug counsellor Tim Chiswell, that two-thirds of heroin users are self-medicating as a result of child sexual abuse. This estimate of two-thirds has been quoted to me by others too. I spent much of my time undercover learning heroin users’ individual histories, and so this estimate doesn’t surprise me. I remember in a debrief in Northampton, a detective whose job it was to research intelligence from my day’s work complained; “How come you always come back with their life story? Do we really need to know this shit?”

And yet existing in what is possibly the lowest of places, I widely observed the purest generosity I have ever encountered. Time after time I have seen people who are living hand to mouth, minute to minute, constantly in fear of not affording their next £10 bag, give, at severe cost to themselves, to someone who is perceived to be in the same situation.

One example of this was a young woman I met in Northampton in 2004. Samantha was her name. She always wore a yellow tracksuit, I remember her in it clearly, as Kill Bill had just been out in the cinemas, but of course she wouldn’t have known the reference. I got to know Samantha very quickly, and her life story burst out of her with a need to be heard. At the age of 12 her step father would sit on her bed, and rape her with his fingers whilst masturbating. She told her mother eventually, who immediately punched her on the side of the head, splitting her ear. Samantha was in her early twenties when I met her. She took heroin because when she didn’t, she tended to attempt suicide. She managed her habit fairly well though, when her tolerance got too high, she would “do me rattle”, that is she would go through a withdrawal, and after 7 days abstinence, go back to the drug. A week was long enough to bring her tolerance down, but not so long that her memories haunted her to complete despair. She did this, because if her tolerance got too big, then she got tempted to fall back into prostitution, a fate she had, at that point, escaped from. She survived by shoplifting to order for a small group of households and most of her target produce was toiletries, deodorants and the like.

One thing the under-cover cop has to be wary of is always being the guy with the money, as it can arouse suspicion. So if my role was as a heroin user, sometimes I would while away a day apparently struggling to get by. I am aware that I used to act rattling fairly well. It was on one of these days that I bumped into Samantha. She asked how bad I was, and I told her I was rattling too much to graft (shop-lift). She became extremely anxious as she produced a five pound note. She handed it to me, anxious because she was deciding to give me all of her current stash of money. I turned it down, and she was confused. It was a very basic decision for her, I clearly needed that money more than she did, because she was around six hours away from being as ill as I appeared to be. It is a struggle to find the words for how desperate a situation Samantha was in. Hers was a level of generosity that is hard to imagine unless you have seen such extremes of existence.

This is only one example. The attitude of Samantha I found very common amongst those inner city drop-outs, the sub-class of people who struggle, but who are not noticed.

I take the view that Samantha, and everyone like her, should be kept safe. Safe from the gangsters who exploit them, and freed from the constant drive to finance this hugely expensive drug habit.  If the supply of heroin was taken completely away from Organised Crime, and if the drug was provided to those who need it, in Samantha’s case she would have been free of the risk of prostitution, and would have had the time in her life to receive whatever care she needed. And society should provide all of the safety and care that she needs.

I am aware that there are many who will never be convinced of the needs of such heroin users. Many refuse to believe that there are so many abused and broken people self-medicating. To those people let me appeal to you on another level completely. Please, think of the numbers.

During the late eighties and early nineties, Dr John Marks carried out an experiment in Widnes, where he prescribed both heroin and cocaine to the problematic users in that town. His clients stopped committing crime, and their health improved, but most importantly, he noted no new users at all, despite regionally large increases in the use of those drugs. Without a need to fund their habit, user-dealers had no need to find new customers. The “professional dealers” went away, because their market had disappeared. Further, Merseyside Police reported a 93% drop in acquisitive crime 2.

So if the story of Samantha does not move you, consider this. Why should the rest of society pay for the drug habits of the few? Why should we put up with crime, and high insurance premiums? Give them the drug they need so we don’t have to suffer the consequences of them using it. Because even if we are not inclined to be generous, this argument still makes sense.