Those of us within the world of drug law reform spend a lot of time and energy further convincing each other that this “War on Drugs” is a very evil thing indeed. We may, at times, have less engagement than we’d wish with those still yet to be convinced that our drug laws need to change.  ‘Chasing the Scream: The First and Last Days of the War on Drugs’ is one of those rare pieces of media that has appeal about the topic outside of the usual circles. 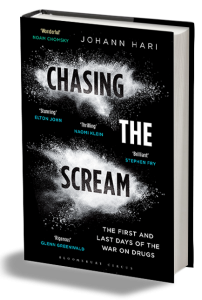 This book moved me considerably. Those of us that are drug reform geeks may expect to find nothing new in a book that charts the history of the drug war, but if anything can starkly remind us that this war is a war on people, then Johann Hari’s book is it. This is a piece of writing that shows the many human faces affected by prohibition, and it engages the reader in each individual story.

Hari brings to life the central character of Harry Anslinger, the architect of global prohibition, and weaves his story into the narrative across the decades by his thought provoking title, and references to the personal demons of what is considered a racist law enforcer.

The book highlights the enlightenment of certain figures – people who are now forever entwined with the history of the coming end of the drug war. The mayor of Vancouver is a good example – his complete change of attitude, and eventual staunch support for the supervised injection site, Insite, had me shedding tears. There are many moving sequences in the book, but I can particularly identify with this story of Mayor Philip Owen; he spent time with his city’s heroin users and found himself developing an understanding and sympathy for them. This resonated strongly as I too spent many years with heroin users, spending a great deal of time with them in similar run-down inner cities as I worked undercover. It seems that empathy is the path to enlightenment.

It is written from the perspective of the writer seeking the truth about the topic, so while sometimes it can be horrific and shocking, it still allows the reader to form their own opinion. This makes it invaluable, as it is writing that will engage those that have previously had no interest in the topic. It is in my view, essential reading.

It is important to keep work such as Chasing the Scream in the public consciousness. This book, like the film The Culture High, is something that can be used as a challenge to the unenlightened. “Read this” or “Watch that” we should say, and when you’ve finished tell me again how the War on Drugs is just. Lend the book to a friend that wouldn’t think to buy it, have a Netflix movie night with your family and watch The Culture High or Breaking the Taboo. We are the gatekeepers to the conversation that we all need to be having.

The Culture High, challenge somebody to watch it.

As a LEAP speaker, I’m often equipped with an arsenal of reports, leaflets, and useful publications. It’s useful to show a new audience a tangible reference point. When Chasing the Scream is released in paperback, I shall be getting myself a second copy so I can use it to challenge individuals’ views. Having spent many years seeing first-hand how prohibition crushes so very many drug users’ lives, and how it numbs society to suffering, I am now, like many activists, committed to spreading the word. With my previous position within the machinery of prohibition, I now consider myself duty-bound to change minds wherever I can. I suppose anyone who is enlightened about the need for reform is also duty-bound – we all need to make every effort to enlighten people where we can, and use every tool at our disposal. Little by little we can bring about change.

There are various online interviews with Johan Hari about the book, so you can wet someone’s appetite by directing them to one of those. Here is a superb interview the SSDP UK did with Johan on a podcast: https://www.youtube.com/watch?v=VQQPynH3rCc

If you are thinking of attending the Hay festival this May, there is a debate between Hari and Peter Hitchens on Sunday 24th May: https://www.hayfestival.com/p-9632-peter-hitchens-and-johann-hari.aspx