We’re pleased to bring you the next episode of the Stop and Search podcast – we’re calling this one: Cannabis: The Grassroots Revolution. Have a click and listen... 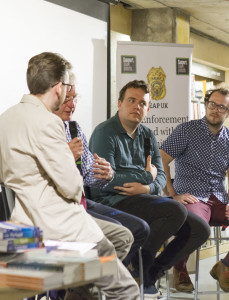 Given the title, you might have guessed what we’re discussing – but we certainly don’t all agree on the issue of drug law reform. With concerns for mental health and societal well-being, Joe Wells is far from convinced that we need to ‘legalise’ cannabis. So, we’re going to have a conversation and see if we’re able to find mutual ground. Can the case for reform alleviate Joe’s worries? Will Norman Lamb’s manifesto for reform win Joe over? And will Dale’s experience and film clips have an impact on Joe’s final decision?

We had a great audience once more, and there were some great contributions. We hear from Steve Rolles who is the Senior Policy Analyst at Transform Drug Policy Foundation. We also hear from Greg de Hoedt, Chairman of the UK Cannabis Social Clubs movement (UKCSC). And as ever we have our regular LEAP UK contributor, the Chairman, Neil Woods.

If you enjoy this podcast episode, why not check out our previous show with Robin Ince. We’re also hosting live events throughout the year, such as our next Stop and Search live recording with Rufus Hound on July 12th at Tottenham Court Road Waterstones – we’ll be talking about drugs and entertainment, and we’ll also be chatting about our Chairman’s new memoir written by JS Rafaeli. So, come and find us – and have your say!

If you enjoy our Stop and Search podcast, please do pop along and review us on iTunes. You can also see links of interest (such as the Grassroots film trailer) over at Acast. Stop and Search is proudly part of Scroobius Pip’s Distraction Pieces Network.