A year before my father died I had a very enlightening conversation with him about the impact of prohibition. It was in 2009, I was detective for Derbyshire CID, and I had had one of those days at work that left me feeling emotionally drained, and more than a little contemptuous of some of my fellow human beings.

I had been called to a house where a drugs search warrant was taking place, to provide advice and assistance as a qualified drugs expert. This house was home to a young couple, one of whom used heroin problematically. What astonished me was the television crew outside the house, using hand held cameras to sneak a peek through gaps in curtains. A director was seemingly irritated that the occupants had refused entry to his team.

I was confused by the media presence, and colleagues had to explain to me that daytime reality TV was a growing trend. Wasn’t it cool that we might become part of a Police Interceptors program, I was asked?

Having worked for many years under cover, and having got to know a lot of heroin users, I felt repulsed at this casual intrusion. Inside the house I quickly answered the inane questions of the body-armoured uniforms and made a beeline for the disturbed young woman shaking as she perched on the edge of her sofa. I politely refused when her boyfriend offered me a cup of tea.

Ann, as I will refer to her, was fairly typical of a problematic heroin user. It took a little empathy and a short conversation to establish that Ann had had a traumatic childhood and suffered from mental health problems. She desperately self-medicated with heroin, and occasionally would sell a few bags to others to manage her own habit.

To compound the trauma in her life she was treated as a criminal. The police had smashed in her door, leaving her shaking, further traumatised. And on top of that someone wanted to make her the centre piece of a voyeuristic drama. She kept asking me, “Will I be on TV? They can’t see me, can they?”

My father had no idea that this kind of television existed either, and his reaction was even more negative than mine. He was born in 1926, and remembered a time when the privacy of one’s own home was held in greater importance than it is now. Bearing in mind my dad was conservative in both senses, it surprised me when he stated that the old system of providing heroin addicts with a prescription was the most humane approach. He was shocked by the presence of the television crew but his principles went deeper than that; he remembered a time when it was a very grave thing indeed to have to enter somebody’s home and breach their privacy.

“The west fought for 500 years to acquire these basic rights, and to just hand them away, thoughtlessly, means we have to fight again for hundreds of years to get them back. It’s very hard to acquire human rights but it’s very easy to give them up” (Annie Machon, 2014, The Culture High)(1)

The truth is we have not only already surrendered some of our hard-won freedoms, we as a society have become numb to the impact this has had on some of our fellow human beings. This is a photograph from the public social media of South Wales Police. Posted on Facebook, it shows a drugs warrant taking place about three weeks ago: 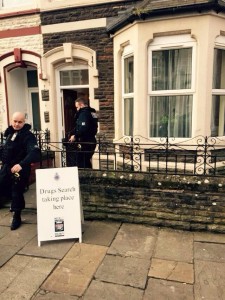 Let’s just imagine if this had been a warrant for images of child sexual abuse. What a media storm this would create. Pictures of police carrying suspect computers out into the street would appear. The backlash would be dramatic. Concern of a vigilante response, stories of family members being victimised, any children connected to the family bullied at school. And that’s before you start to consider that any person subjected to a search warrant is innocent until proven guilty! All the police need to convince a magistrate to provide a search warrant is some credible intelligence, not evidence. Trust me, a shocking amount of ‘intelligence’ comes from a socially active neighbour who doesn’t much like the look of someone.

So why is there no backlash like this for a drugs warrant? Why no community concern for creating stigma and humiliation? Is the family of a drug user of less worth than those of a paedophile? Or a burglar?

In addition to search warrants, the Misuse of Drugs Act also gives the power to take someone from the street, to a place where they can be strip searched for drugs, should a constable suspect that they have any. How would you feel if this happened to your son, or your daughter? Well, somewhere in the UK, it will probably be happening to someone’s son or daughter, and is certainly more likely to be if they happen to be black, according to a recent HMIC study (2)

The first step in drug policy reform will have to be decriminalisation such as is proposed by the Liberal Democrats, Plaid Cymru and the Greens. The foremost reason in most people’s minds for this is that drug users should not be treated as criminals, and where help is needed, it should be given. Being branded a criminal does not help anyone in itself, and its repercussions make things much worse for the individual.

But following decriminalisation, we need to reflect as a society. When drugs are again seen as a health issue rather than a criminal one, we have to become aware that we have allowed ourselves to remove the liberty of the people who may have these health issues. We have become accustomed to stigma, to seeing personal suffering as televised entertainment, to accept that our youth can be searched with impunity. The marginalisation has gone deep, the state has very successfully made us numb to the dehumanising of our neighbours, and the removal of our civil liberties.